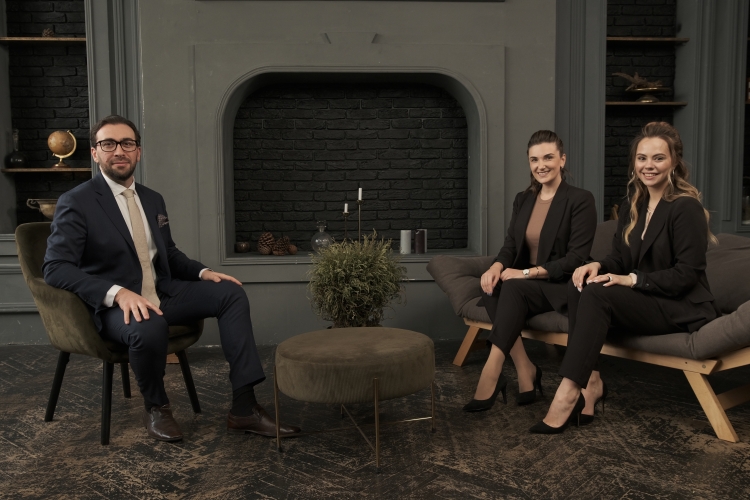 Alexander Vinnikov at KYIV NOT KIEV: NATO is here as a friend of Ukraine

KYIV NOT KIEV, a news video project launched by TRUMAN Agency team members, continues the season of ambassadorial interviews. At the latest episode of the show project anchors Tetiana Gaiduk and Polina Boichuk hosted Alexander Vinnikov, the Head of the NATO Representation to Ukraine.

Mr Vinnikov noted that it was a professional challenge to come to Ukraine as the Head of the NATO Representation in historic for Ukraine period (2015 - Russia has already occupied Crimea and began its armed aggression in eastern Ukraine).

Since that time NATO decided to extend its support to Ukraine critically. "That support took both political and practical dimension. One of the practical implementations was the strengthening of NATO presence here in Ukraine". To that end, the Alliance opened the NATO Representation in Kyiv.
On the rule of law in Ukraine

"I think all of Ukraine's Western partners are in agreement that this area of reform represents a clear priority from our perspective and will help Ukraine to get closer to its strategic goals of the EU and NATO membership", says Alexander Vinnikov. Given NATO Secretary General's historic speech at Verkhovna Rada and a recent statement by the G7 ambassadors, it's fair to say that Ukraine's partners firmly support the judicial reform implementation.

On the reform of Security Service of Ukraine

Mr Vinnikov emphasized that this reform "is a key aspect of the reform agenda and will bring Ukraine closer to Euro-Atlantic standards". He welcomed the adoption in the first reading a draft law on the Security Service and noticed that the voting showed a cross-political consensus among factions in Verkhovna Rada. It represents the understanding of authorities of the reform importance for national interests.

"The country has to be ready for membership [in NATO] before that political assessment can be made of how the countries integration into the Alliance will enhance the Alliance's security", says Alexander Vinnikov.
Ukrainian New Europe Center released a discussion note covering the topic named “Progress under Zelenskyy`s presidency”. Experts agree that during Zelenskyy`s presidency Ukraine has shown quite good dynamics in implementing NATO standards.

For comparison, experts of the New Europe Center have shown a percentage of implemented standards by NATO Allies. For example, as of early 2021, 22% of NATO standards have been implemented in Montenegro, 29% in Albania and Northern Macedonia has not reached 1% yet.

Speaking about partner countries of NATO, for example, Austria reached 14%, Ukraine - 19%. We can agree that Ukraine has a very good pace in implementing those standards.

On conflict with Hungary

"All of the practical work that we do with Ukraine has not been affected by this position", says Mr Vinnikov. He notices that Ukraine continues the political dialogue with the Alliance using other platforms, maximizing their effectiveness. At the same time, NATO is looking forward to Hungary and Ukraine resolving their differences concerning the law on education in particular.

Possibility of Ukraine's membership in NATO

In 2008 NATO leaders promised Ukraine and Georgia that they would one day join the Western defence alliance. At that time, Germany, France and other NATO states, instead of offering two countries a Membership Action Plan, pledged to invite them to join at some point in the future. Since then, Ukraine is combating Russia-backed terrorist groups, Crimea stays occupied as well as 20 percent of Georgian territory.

For Ukraine to become a member of NATO, it should ensure visible for the Alliance functioning democratic institutions, the rule of law, the fight against corruption and respect for human rights. "Every member that joins has to share those values fully and has to show that its democracy is in line with the stand that the Alliance represents", states Mr Vinnikov.