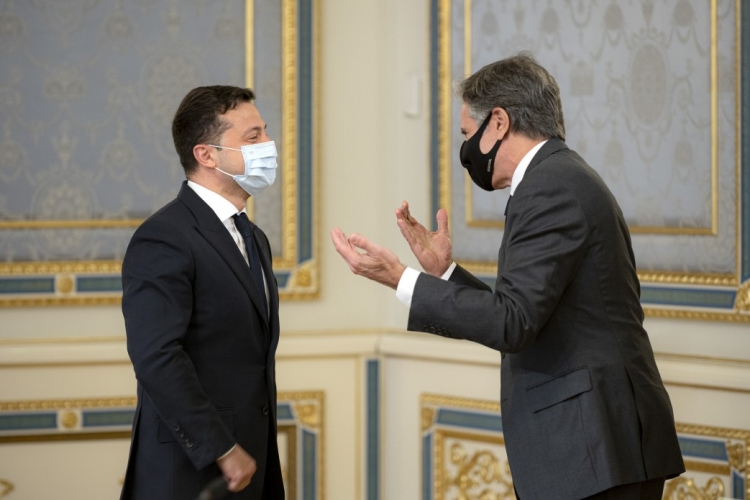 US Secretary of State Antony Blinken in Ukraine: about foreign threats, internal obstacles and reforms

The Secretary of State Antony J. Blinken paid a two-day official visit to Ukraine calling that a great opportunity to discuss continued Russian aggression, reforms and challenges. He flew from London, where the G7 meeting was held, and reaffirmed that all G7 countries have consolidated position concerning Ukraine.

“I really came, as I told you, on one of my first trips as Secretary of State to convey personally on behalf of President Biden how deeply we value our friendship, our partnership with Ukraine” – marked Antony Blinken at a Joint Press Conference with Ukraine`s President.

He told that Ukrainian civil society is very strong, but has also underlined several times that there are both, external and internal forces, lined up against it. He said they discussed Ukraine`s Euro-Atlantic aspirations, vital work that Ukraine is undertaking to advance reforms and defend itself.

Secretary Blinken reaffirmed that the US are aware of Russia`s actions in Crimea, Donbas and Russian military presence along the borders. The threat still remains.

Consequently, the security issues came to the foreground – the US will continue its military support and cooperation.

Ukrainian side stated that possible measures to increase security in the Black Sea and Azov Sea regions were also discussed.

“Ukraine faces twin challenges: aggression from outside coming from Russia, and in effect, aggression from within coming from corruption, oligarchs, and others who are putting their interests ahead of those of the Ukrainian people” – told Mr. Blinken adding that these two things are linked because Russia also plays on that internal aggression, using corruption and using individuals to try to advance its interests.

Underlying that Washington opposes Russia’s destabilizing actions toward Ukraine, he made it clear that exactly Russia and corrupted forces strive to take away from the Ukrainian people what is rightfully theirs: their right for their future.

It is obvious that if Joe Biden pays visit to Ukraine, it will be a signal to Kremlin. According to both sides, it is likely to happen. Nevertheless, now we see that American diplomats show Ukrainian leadership it`s time to stop accusing the previous administration and start to fulfill the promises given to the Ukrainian nation. We should quickly correct mistakes and be encouraged when the US Secretary of State reaffirms unwavering support, but explains that the steps towards transparency in judicial system and anticorruption bodies need to be taken.

Is it right in this case for President Zelensky to evade the questions posed by foreign journalists about Rudy Giuliani, Andriy Yermak or recent changes in Naftogaz?

This visit definitely demonstrates to Kremlin, that Washington is aware of all Russia`s actions: from cyber attacks to complicated corruption schemes abroad, the real matter of the Nord Stream-2 pipeline and processes in Europe where Russia is involved in.

“The laws are very important, but so is their implementation.  And I think from what we hear, the Ukrainian people are looking to see that the laws, once passed, are actually implemented” – concluded Antony Blinken.