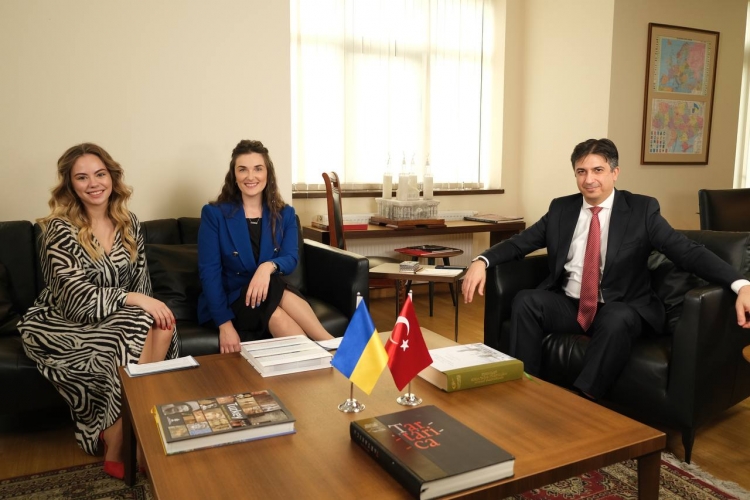 Ambassador of Turkey to Ukraine in KYIV NOT KIEV: A friend in need is a friend indeed

Hospitality, dynamism, family values, pride in own country – according to Turkish Ambassador, those are the main similarities between Ukrainians and Turks. That is why probably, asked about existence of any stereotypes about Ukraine and its citizens Mr Güldere said “I felt the same energy in the Ukrainian cities where I went”.

On Ukraine`s image in Turkey

Does Ukraine remain in the blind spot for Turkish citizens, being on the other side of the Black Sea?

Mr Güldere didn`t agree with this idea. "Terming Ukraine as a blind spot would be over-exaggerating it. But is it at the level [in Turkey's agenda] where it should be? Definitely not. This is something which we all should be working on," he said. The Ambassador highlighted that the current situation is very normal, considering the duration of Ukrainian independence.

On joint production of defence equipment

Nowadays, Ukraine and Turkey are working on creating "Akinci" - a high-altitude strike drone.Thanks to Ukrainian specialists, Akinci has the most crucial parts – engines, which are being created in Zaporizhya, Ukraine, at the Ivchenko design bureau "Progress" and the plant "Motor Sich".

On Turkey's participation in the Crimean Platform

During the most recent meeting of Ukrainian and Turkish Presidents, they agreed to support the Crimean Platform as a new format to address the illegal annexation of Crimea by the Russian Federation.

"A friend in need is a friend indeed," underlined Mr Güldere. This April, Ukrainian Deputy Prime Minister Oleksii Reznikov and Turkish Minister of Environment and Urbanization Murat Kurum have signed an agreement under which Turkey will build about 500 apartments for representatives of the Crimean Tatars and other internally displaced persons.

On Free Trade Agreement between Ukraine and Turkey

The Ambassador stated that both sides have their questions regarding the conclusion of this agreement because of employment concerns. However, the Ambassador states, "It's not about how much cake I will eat, or you will eat. It's about making the cake bigger".

Ukraine is determined   to invite more Turkish investors in the near future. Defence sector is one of the most important spheres of collaboration, having in mind ongoing war in Eastern Ukraine and the need of Ukrainian military in armaments of good quality.

On Turkish investments in Ukraine

“We have about 4 billion dollars of Turkish investment in Ukraine," said the Ambassador. Mr Güldere stated a few ideas about how Ukraine and Turkey can improve investment growth: the first idea – projects based on public-private partnership mechanism. The good example would be Ankara Şehir Hastanesi Hospital, which Prime Minister of Ukraine Denys Shmyhalrecently visited, is designed to serve 30,000 patients daily. The second idea is creating organized industrial zones to promote the rise of Ukrainian cities to the level of “Anatolian tigers”.

On tourism during the pandemic

Russia prohibited its citizens from travelling to Turkey, explaining this by the aggravation of the situation with the spread of coronavirus infection. The decision can be connected to statements of Recep Tayyip Erdogan after his meeting with President Zelenskyy. The President of Turkey claimed Turkey's unwavering support for Ukraine's territorial integrity and expressed decision not to recognize the annexation of Crimea.

The Ambassador sees this ban as an opportunity for Ukrainians. "This may allow Ukrainians to spend longer holidays in Turkey with better prices," said Mr Güldere.

"Book now,"  advised the Ambassador to all Ukrainians planning on going to Turkey this season.