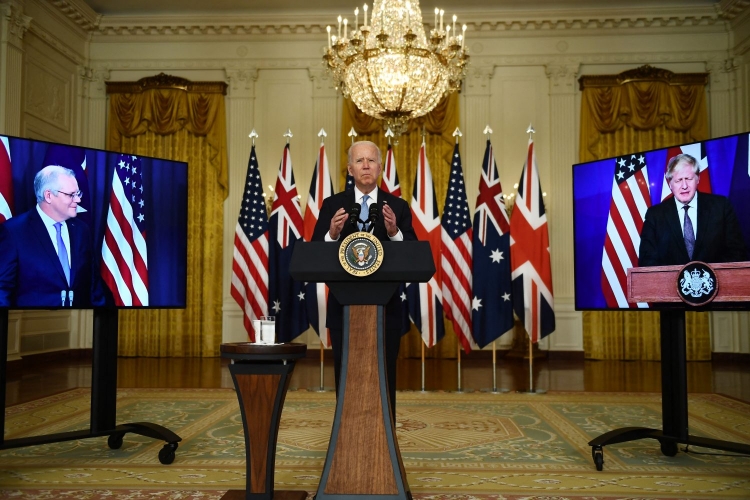 On September 15, the leaders of the United States, Britain and Australia announced a deeper partnership between the states in the military sphere. In particular, the sides have signed a new trilateral agreement, which has already been symbolically nominated AUKUS (Australia, the United Kingdom, and the United States).

Despite the numerous headlines, it is not worth talking about the freshly minted military alliance, experts say. After all, security cooperation between Washington, London and Canberra has a long and rich history. AUKUS just demonstrates a qualitatively new level of relations between the traditional allies.

The agreement provides for co-operation between the states parties in the field of artificial intelligence and cybersecurity, as well as for the better interoperability of their armed forces.

A key aspect of AUKUS nevertheless was the agreement to enhance Canberra's defense capabilities. The US and the UK have pledged to share with Australia the technology for the nuclear submarines construction. Thus, the presence of the allies in the Indo-Pacific will increase significantly.

If Japan, for obvious reasons, immediately backed a new defense agreement of its partners, China took the initiative with extreme hostility. Beijing is convinced that the key goal of AUKUS is to curb Chinese influence in the region.

However, a real surprise for the global community was the negative reaction of Paris to the creation of this new security format. In protest, France even recalled its own ambassadors from Washington and Canberra. For further consultations, so to speak. But the real reasons are somewhat different.

First of all, the agreement on the establishment of AUKUS terminates automatically the Franco-Australian contract for the construction of 12 diesel submarines, which was concluded in 2016. According to various sources, the contract price ranges from $40 to $90 billion.

For Paris, it is not about money alone. The arrangement guaranteed contracts for state-owned enterprises, as well as numerous jobs. That’s why the termination of the deals does not fit the plans of the current French President Emmanuel Macron, with his attention focused on the electoral preparations.

The format in which the creation of AUKUS was announced, has also become a blow to Paris. According to French Foreign Minister Jean-Yves Le Drian, his staff learned about the signing of the new agreement just a day before its official promulgation. Although negotiations on AUKUS have been underway since April 2021, as it was later revealed.

France claims aggressively that the trust between the Western allies has been undermined. Some experts expect Macron to emphasize the independence of the European Union in defense and military matters. The French president, as is well known, has repeatedly questioned the effectiveness of NATO's mechanisms.

However, will the EU manage to give an adequate response to the American signal? Not clear yet. Europe is gradually losing its geopolitical influence on the world stage. The creation of AUKUS, the news of which overshadowed the publication of the EU's Indo-Pacific Strategy, testifies to Washington's reorientation towards new allies in the confrontation with China. The soft approach of Europeans and their multi-vector policy no longer satisfy the United States.

At the same time, not all EU members share Paris’s great power ambitions. Many of them seek to save on seсurity and greatness, experts believe.

In this light, the positions of states, in some way dependent on the actions of major international players, are at risk. Ukraine is one of them. Now the internal crisis in the Euro-Atlantic camp may complement the global West-East confrontation. Under such conditions, the formation of Ukrainian foreign policy will turn into an even more difficult task. Europe’s potential retreat to the periphery of the international system will, in turn, make the settlement of the Ukrainian issue virtually impossible.