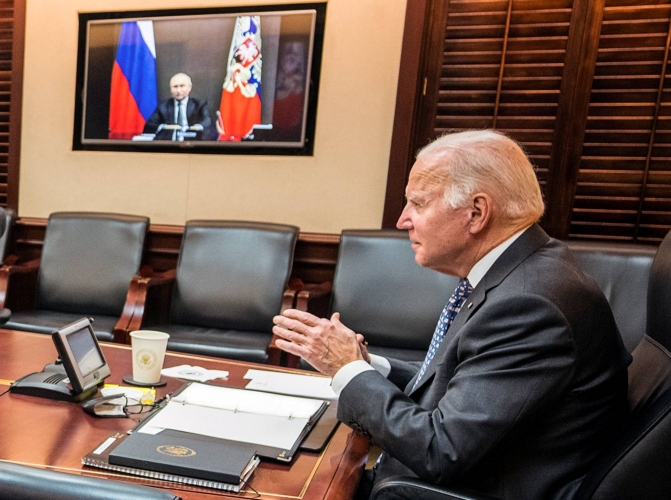 Ukraine between Washington and Moscow: What to expect from our western partners?

The situation around Ukraine’s borders is heating up, with Russia flexing its muscles to get concessions from the West. But will the Kremlin succeed? Negotiations between the parties have showed it to be difficult.

Yesterday, December 7, the whole world awaited the results of the meeting between the American and Russian leaders. According to sources, Biden-Putin negotiations concerned mainly Ukraine. It is not surprising at all, since Putin would hardly have managed to persuade his American colleague to talk without loud threats towards Kyiv.

Besides traditional topics, such as Ukrainian territorial integrity and the proper implementation of Minsk agreements by Moscow, a new issue arose in the agenda of American-Russian relations. Since recently, the Kremlin has expressly demanded legal guarantees of NATO non-expansion eastward from the West. Last night, a resounding question was also raised with Moscow being categorically rejected.

According to US National Security Adviser Jake Sullivan, President Biden has stated the choice of international partners to be a private matter of each state. No agreement can be reached on Ukraine’s membership in NATO.

As the experts expected, Moscow once again tried to put Ukraine as a threat to its own security. Washington, in turn, warned Putin against further intervention and troops build-up. In the event of a full-scale military conflict, the United States promised to take immediate economic measures as well as to increase the supply of defence equipment to Ukraine. Nord Stream 2 will become a lever of pressure on Moscow under such circumstances, the White House has claimed. The negotiations on the issue between Washington and the new German government have already begun.

The recent NATO ministerial meeting in Riga has also demonstrated the US and their partners’ hard-line stance towards Russia. The Allies declared themselves ready to immediately reinforce the security of the eastern flank countries by 40,000 troops in Latvia and stronger US presence in Poland.

The partners also made it clear that if a military conflict broke out, Kyiv would not remain alone. Unfortunately, such statements still lack in detail.

For now, NATO is going to coordinate the establishment of a unified economic sanctions regime by its members, including not only the EU but also the United States and Canada.

At the OSCE ministerial meeting in Stockholm the atmosphere was equally tense. Following some loud statements, Russian Foreign Minister Lavrov took part in negotiations with the US Secretary of State Antony Blinken. Witnesses say the conversation to be extremely heated. A common press briefing was out of the question.

The claims of the West bring hope. But experts warn Ukrainian authorities against excessive hopes for Western support. After all, China remains the main threat to Washington. Kyiv needs to enhance its own capacities.