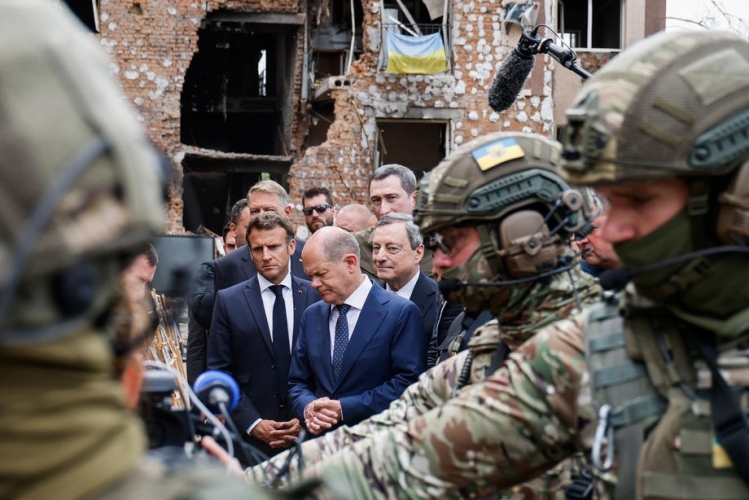 Ukrainians rejoice in the positive decision of the European Commission concerning possible Ukraine candidacy for EU membership. In the meantime, we suggest analysing what recent changes could contribute to this and what will come next.

Last week, President Zelensky said on Twitter that Kyiv and Paris were coordinating steps on Ukraine's path to the EU.

That was considered a signal of softening French position concerning Ukraine's membership in the European Union. However, at that time, the Elysee Palace maintained its usual restraint and did not reciprocate Zelensky's tweet.

Today, the European Commission approved its positive opinion on Ukraine's compliance with the criteria for a candidate to join the European Union. However, key changes in this regard occurred yesterday.

Experts’ opinions on the purpose of such a visit were divided. Some of them believed the European leaders to bring to Ukraine a new plan for a peaceful settlement of the war or the so-called Minsk 3. Others focused on the European integration track of negotiations. Yesterday, the latter opinion was confirmed personally by Emmanuel Macron. At the press conference following the talks, Emmanuel Macron unequivocally supported granting of a new status to Ukraine.

The positions of German Chancellor Scholz and Italian Prime Minister Draghi have undergone similar changes. Both called for "immediate" candidacy for Kyiv.

Several experts believe the final opinion of the European Commission to be decisive in the issue of Ukraine's new status. This was confirmed by the readiness of the Danish government to support Ukraine by its vote, subject to a positive recommendation from the European Commission. Until recently, the country was in opposition, emphasizing Ukraine's incomplete anti-corruption reforms.

Nevertheless, this is not the end. The candidate status itself will be granted by the member states at the next EU summit to be held on June 23-24 in Brussels. The decision requires the unanimity of all participants.

"Compared to the beginning of the week, today we are closer to obtaining the status of a candidate for EU membership. Thanks to our guests. But both not all obstacles and not all traps have been overcome. The decision is made by consensus, so we all continue to work calmly as a team, focused on the result," said the Ukrainian FM Dmytro Kuleba after the visit of the European leaders.

What exactly will Ukrainian diplomats have to work on? Unfortunately, there is still no consensus in Europe on granting a candidate status to Ukraine. Altered positions of France, Germany, Italy, and Denmark on this issue will be crucial, but not decisive. Several European countries still believe that Ukraine has not fully met the necessary criteria.

Today, this team includes Austria, Sweden, and the Netherlands (experts are sure that Hungary will vote in Ukraine’s favor). Now we can expect positive changes after the decision of the European Commission.

But what awaits Ukraine in case of failure to convince the above governments?

According to Deputy Prime Minister for European Integration Olha Stefanishyna, two plans have been prepared for Ukraine in Brussels: A and B.

Under the first scenario, Kyiv will receive a positive recommendation from the European Commission, and EU member states will vote to grant Ukraine candidate status. After that, Ukraine will receive a roadmap for reforms to follow at the stage of EU accession negotiations.

The second scenario, in turn, is regarded on Bankova Street as a defeat. Which is not surprising. After all, according to the plan B, Ukraine will become a so-called "candidate for candidacy" and will have to do homework in the form of reforms before gaining new status.

The status of a candidate for EU membership will open new opportunities for Ukraine (more details in our previous posts). Most importantly, however, such a decision will demonstrate to the world the unity of Europe in supporting Ukraine. This is exactly what Ukrainians, sacrificing their lives for the sake of European values, need.