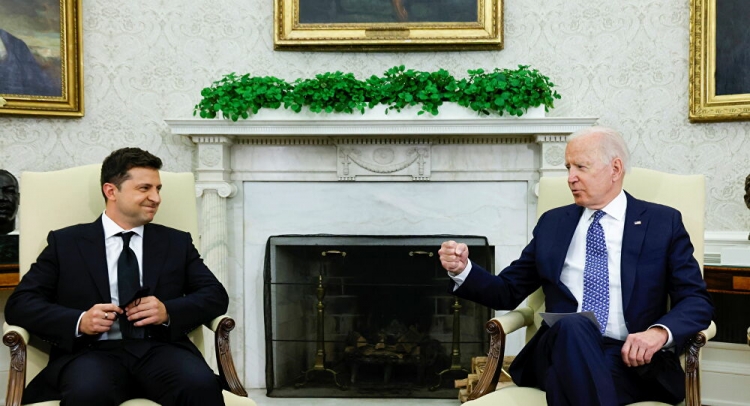 Presidents Zelenskyy and Biden met in Washington on Wednesday. Instead of the planned one hour, tete-a-tete talks lasted twice as long. But did the Ukrainian delegation achieve all its goals? Having analyzed the joint statement issued by the parties, TRUMAN will try to take stock of the Washington summit.

Let's start with the global tasks that both delegations have set for themselves. If the key issue for the Biden administration was to reaffirm its own support for Ukraine and demonstrate to the world that the States has returned to the international arena, in the case of Zelenskyy's team everything is much more complicated. The negotiators were expected to resolve the issues of Nord Stream 2, Ukraine's membership in NATO, and the involvement of the U.S. in resolving the conflict with Russia. Not an easy task.

The conditions under which the visit to Washington took place were not very favorable either. Today, the Biden administration's main focus is on resolving the "Afghan crisis", the consequences of which will certainly affect the upcoming Congress elections. Nevertheless, much has been achieved.

According to the final document of the summit, the parties agreed to revive the Strategic Partnership Commission, which de-facto ceased to function in 2018. A new meeting in this format, which will take place by the end of autumn, may end with the signing of a new Ukraine-US Charter, which will certainly bring relations between the states to a new level.

Equally important was the signing of the Strategic Defense Agreement between Kyiv and Washington. Surely, the agreement is framework in character and needs to be detailed. But even today, it touches on all issues that are of most interest to Ukraine. This includes security in the Black Sea, countering cyberattacks, joint struggle against Russian aggression, and the exchange of intelligence.

In this context, it is also worth mentioning the new package of military aid that Washington promised Ukraine. The arrangement provides for the supply of lethal and non-lethal weapons worth $ 60 million. Ukraine will soon receive a new batch of American Javelins. Experts believe that in this way the Biden administration responds to Russian provocations on Ukrainian eastern borders, increasing the cost of potential aggression.

At the initiative of President Zelenskyy, the parties agreed to cooperate for the release of Ukrainian political prisoners. According to the list provided by the Ukrainian delegation, there are about 450 of them today.

In general, the United States has reaffirmed its support for Ukraine's sovereignty and territorial integrity. There will be no recognition of the annexation of Crimea, the US delegation said. To overcome the consequences of hostilities in the Donbass, Washington will provide $ 45 million in humanitarian aid this year.

The issue of the coronavirus pandemic was not left out either. Here everything is clear and to the point. The States will allocate $ 12.8 million to Ukraine to fight COVID-19.

Ukraine, in turn, has made numerous commitments regarding decentralization, judicial reform, reform of the SSU, the SAPO, NABU, and public administration in general. This is exactly what the American side has expected, as evidenced by the $ 463 million allocated for the implementation of such structural changes.

In general, the agreements reached have been impressive in both the number and variety of areas to which they relate. This includes research and development, nuclear energy, climate policy, nuclear non-proliferation, and even space activities.

However, some tasks could not be completed.

The Joint Statement on Strategic Partnership in no way addresses Ukraine's membership in NATO. There are no hints of Ukraine receiving a MAP. Thus, the Biden administration secures its room for maneuver, experts say. According to some of them, the task of Zelenskyy's team was to present its own program of reforms that will prepare Ukraine for such membership. The Delegation has partially completed this task by proposing a so-called Transformation Plan, which would be detailed at a forthcoming meeting of the Strategic Partnership Commission.

The Ukrainian representatives also failed to reach at least some concretization of the US-German agreement on NS2. The mechanisms that will be involved in the case of using the pipeline as a weapon are still unclear.

The progress in the involvement of the U.S. in resolving the conflict in eastern Ukraine is the same. No mention of the appointment of a new special envoy on this issue or of Washington's participation in the Normandy format.

The absence of a joint briefing by the two Presidents at the end of the talks was also an unpleasant surprise. However, experts say it’s not a Ukrainian fault. Biden hardly wanted to answer awkward questions from journalists about the situation in Afghanistan, they think.

In general, the negotiations between Zelenskyy and Biden can be considered successful, as evidenced by the final document. Yes, key issues remain unclear. However, there are objective reasons for this. After the Washington summit, the Minister for Foreign Affairs of Ukraine Dmytro Kuleba claimed that the results of the talks exceeded his expectations, and that he and his colleagues are ready to start implementing the agreements reached.