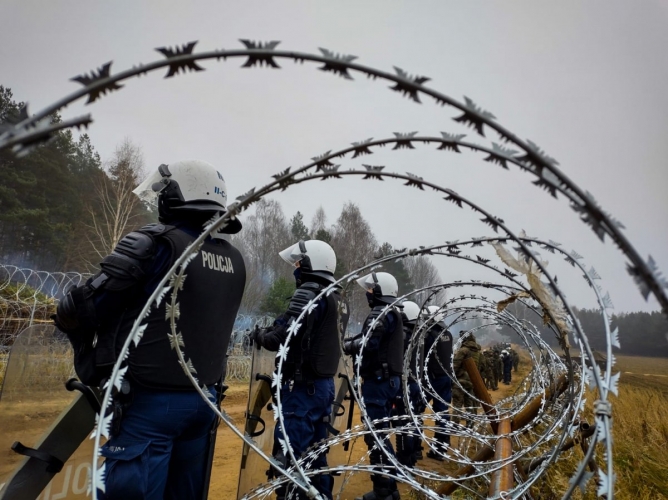 Migration blackmail: What Minsk and Moscow want to achieve

Tensions are growing on the Polish-Belarusian border. Warsaw is negotiating with NATO partners. Belarus threatens to stop the transit of natural gas. What are the forces and interests behind the migration crisis in Europe, read in the new analytics by TRUMAN.

Early last week, the migration crisis on the Polish-Belarusian border escalated considerably. On November 8, a group of refugees from the Middle East tried to physically destroy the border fence near Kuźnica.

Despite the mobilization of 15,000 Polish military, two migrant groups managed to enter the European Union.

Polish data show there are now more than 5,000 people on the border, with about 15,000 migrants in Belarus itself.
Warsaw considers recent events a state terrorism act by Minsk. Poland also has no doubt about Moscow’s involvement in such attacks. The situation is similar on the Lithuanian-Belarusian border.

Both being members of NATO, the states are negotiating the application of article 4 of the North Atlantic Treaty. Latvia, also harmed by an influx of illegal migrants, has already joined such talks.

“We stand in solidarity with Poland and other affected allies,” Stoltenberg told reporters as he arrived for a meeting with EU defence ministers. “We are deeply concerned about the way the Lukashenka regime is using vulnerable migrants as a hybrid tactic against other countries and he is putting the lives of the migrants at risk,” he said.

In Brussels, the criteria for approval of the fifth set of sanctions against Belarus were recently adopted. Now work on the final sanctions list, which the airline "Belavia", National Airport Minsk and the head of the Belarusian Foreign Ministry Vladimir Makei may join, will accelerate considerably.

Nevertheless, experts believe the EU’s reaction to be untimely. Had sanctions been imposed immediately, a full-fledged migration crisis might have been avoided. Unfortunately, today Minsk is ready for a new batch of restrictions.
Europe’s weakness and indecision are the only hope for the illegitimate Lukashenka regime. First of all, the self-proclaimed President is trying to find common ground with Brussels, as well as to obtain concessions from the latter through ultimatums.

To the same end, Lukashenka threatened Europe with an unlikely termination of gas transit through Belarus. However, Minsk is not the main beneficiary of the migration crisis.

Moscow uses events on the Polish-Belarusian border as an information weapon, accusing Europe of abusing refugees.
If the conflict becomes armed, Russia will most likely claim an attack on the Union state. Recently, Moscow and Minsk adopted a common military doctrine and agreed to coordinate defence policy.

The spread of the migration crisis to Ukraine is also one the case scenarios. Warsaw has already warned Kyiv of such a danger.