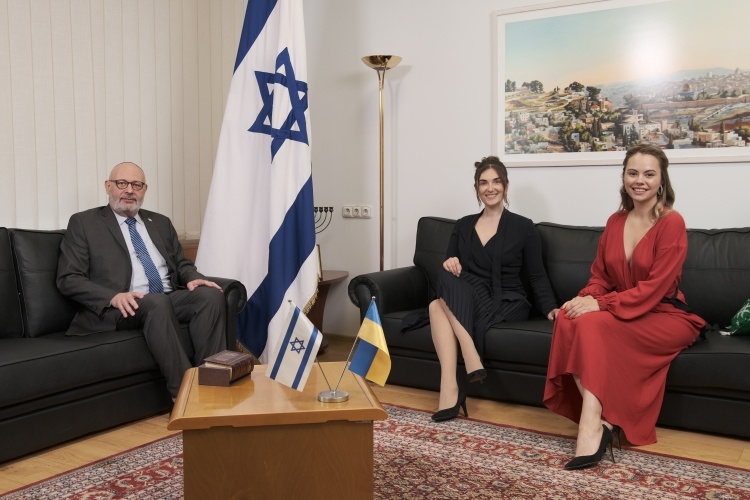 Ambassador of Israel to Ukraine in KYIV NOT KIEV: Israeli investors are still scared of Ukraine

On the Israeli and Ukrainian different perception of Russia

"We don't see Russia at all as an enemy," Mr Lion firmly stated. The Ambassador highlighted that the State of Israel is sure - Russia does not stand behind a weapons supply to Hamas. According to him, Iran is responsible for shipping weapons to Hamas with the aim of destroying the State of Israel.

Concerning the ongoing war in Eastern Ukraine, Mr Lion believes that the only way to change the behaviour of the aggressor state is dialogue, "Israel is also passing messages to Russia on dialogue".

"Your heroes are our nightmare".

According to the Ambassador, Ukraine is one of the countries with the highest level of anti-Semitism now. The reason is people's lack of knowledge about their anti-Semitic words or actions.

The ADL Global 100 Index study for the Anti-Defamation League from New York showed that, as of 2019, Ukraine had one of the highest levels of anti-Semitism in Europe. The highest level is in Poland - in 4 years it increased from 37% to 48%, in Ukraine - from 32% to 46%. The survey says that a staggering 72 percent of Ukrainians agreed with a statement, "Jews have too much power in the business world". Interestingly, the Pew Research Center released different statistics in 2018. In it the lowest level of anti-Semitism was in Ukraine.

Speaking about Israel's refusal to accept Ukrainian steps to perpetuate the names of national heroes by naming stadiums and streets in their honor, the Ambassador says, "Israel cannot accept it, and will be loud about that".  Israeli Ambassador to Ukraine Joel Lyon negatively reacted to the decision of the Ternopil City Council, which named the stadium after Roman Shukhevych, the commander-in-chief of the Ukrainian Insurgent Army.

On Israeli refusal to recognize Holodomor as genocide

Israel still does not aim to take any step to recognize Holodomor as a genocide against the Ukrainian nation, as long as the term "genocide" is used. According to the Ambassador, a lot of Jews also died due to that famine. "For us, it is very hard to say that it [Holodomor] was against the Ukrainian people," said Mr Lion.

According to historians, about 7 million people died of the Holodomor in Ukraine. Almost 20 countries recognized the famine in Ukraine in 1932-33 as genocide of the Ukrainian nation. About 81% of those starving to death in Ukraine were Ukrainians, 4.5% were Russians, 1.4% were Jews, and 1.1% were Poles.

On prospects of Ukrainian-Israeli bilateral relations

Despite the recent fundamental change of the Israeli Government, the Ambassador is convinced that foreign relations of the State of Israel will continue to be very stable. The main message around which negotiations with Ukraine are built is "cooperation in every field". Nowadays, the ties between Kyiv and Israel are solid. The Ambassador even gave an example, "When you have a phone call of your president [Zelenskyy] to my new Prime Minister as one of the first leaders to call, it is a point which shows good and warm relations between countries".

When Ukrainians will be able to go to Israel

Recently Ukrainian media published controversial news regarding Israel opening its borders to Ukrainians. However, Mr Ambassador highlighted – there has been a misunderstanding. "Israel is closed to all foreigners," stressed Mr Lion. Recent news was related to some special requests for entry which may help a person married to an Israeli or a parent of an Israeli citizen. He stated, however, that on July 1, Israel will open its doors for the list of countries from which vaccinated tourists will be allowed to come to Israel. And, no, Ukraine is not one of those countries.

Why Israeli investors don't want to come to Ukraine

According to the National Bank of Ukraine, Israeli direct investment in Ukraine's economy as of 2020 amounted to $ 68,700,000. The main spheres of investments are real estate transactions, information and communication, recycling industry.

"They are still scared," stated the Ambassador about Israeli investors. He, however, highlighted that Ukraine is working on it, trying to reform the country, to have better transparency and less corruption. The necessary and the most significant thing is a strong judiciary. Because when people see a judicial system they can trust, they will invest money.

"You can bring the calb to a cow, but he has to drink for himself", stated the Ambassador. According to him, the Governments` role was to ease the world of business, and there is nothing to do for now.

However, "there is always room for improvement," convinced Mr Lion, so now entrepreneurs examine further needs in Ukraine and Israel to make business relations even more satisfactory and profitable. The Ukrainian and Israeli Governments hope that people will take this opportunity to develop our bilateral relations and use it for the better.

On Ukraine becoming a startup nation

"You have 15,000 Ukrainians who are working for Israeli IT companies and staying in Ukraine," said Mr Ambassador. He thinks that it is suitable for Ukraine too. Because thanks to their experience in Israeli tech giants, they can build their businesses here in Ukraine using that knowledge.