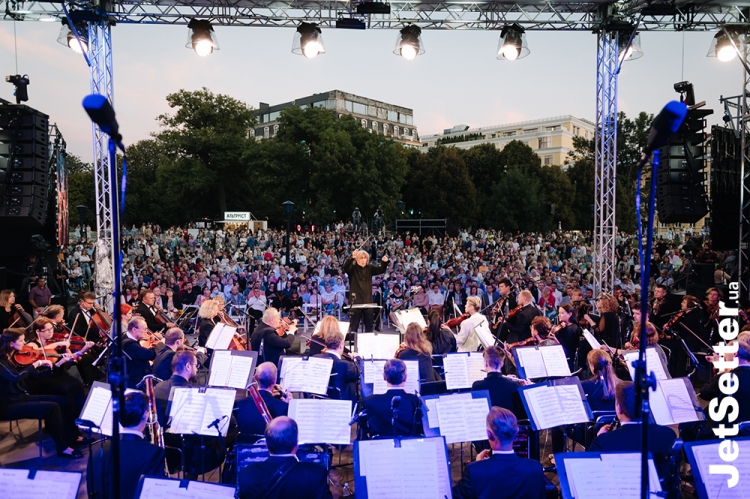 On August 19, the All-Ukrainian Composition Contest “Ukrainian Concert Overture” by the Maria Didkovska Charitable Foundation “Open Music of the City” took place, where the works of the contest laureates were presented and awarded.

In the courtyard of the National Museum of the History of Ukraine, the works of the three finalists were performed by the National Symphony Orchestra under the direction of conductor Volodymyr Sirenko.

The main event of the evening was the premiere of a modern concert overture, which will become an alternative to the legendary work of Mykola Lysenko from the opera “Taras Bulba” 1890. From now on, the composition of Bohdan Kryvopust “Ukrainian Overture” is a musical symbol of the country.

“I am glad to create a piece that, I hope, will be performed and will inspire people.” − the author comments on his victory.

The contest from the "Open Music of the City" Charitable Foundation started at the end of 2020 specially for the 30th anniversary of Ukraine's Independence. Its main goal was to create a modern overture that can be used during all solemn official events.

According to the results of the anonymous voting of the jury, the laureates also were Oleksandr Shymko “Overture of Exaltation” (the third place) and Volodymyr Runchak “Ukraine — Forever” (the second place).

The guests of the evening also enjoyed the music of Ukrainian and world composers and a performance of the National Academic Chapel "DUMKA".

The main partners of the event were the largest law firm in Ukraine Asters, the fashionable portal Jetsetter.ua, the business publication The Page. TRUMAN also joined to this historic event.

“The idea of creating an overture, which will become a national symbol, could not leave us aside. TRUMAN's support of the project is our way of expressing respect and gratitude to Masha Didkovska, Natalia Kovtun and everyone involved in organizing the event, for creating the sound of the new Ukraine” — commented on the support of the project TRUMAN founder Ivan Vaneev.