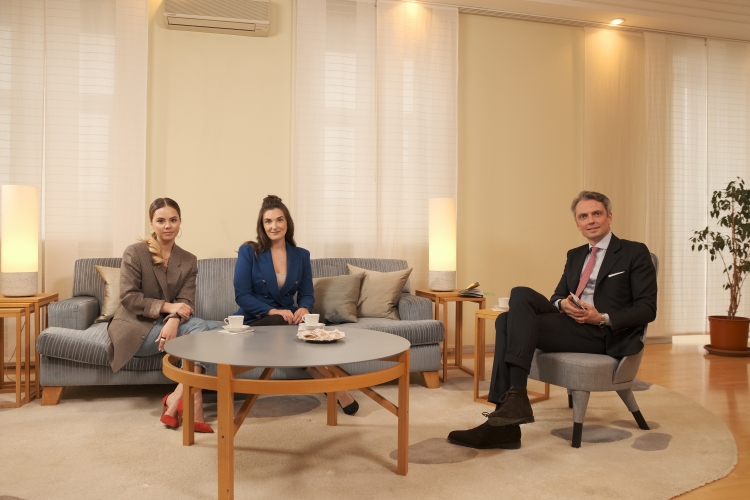 Ambassador of Sweden to Ukraine at KYIV NOT KIEV: Ukraine is a pivotal country in the EU neighbourhood

KYIV NOT KIEV, a news video project launched by TRUMAN Agency team members, continues the season of ambassadorial interviews. At the latest episode of the show project anchors Tetiana Gaiduk and Polina Boichuk hosted Tobias Thyberg, the Ambassador of Sweden to Ukraine.

During the interview, the Ambassador noted that anyone, especially in Sweden, who works with Eastern Europe matters, understands that Ukraine is of enormous importance.

On the war in eastern Ukraine

To the question of whether he feels safe working in Ukraine, the Ambassador answered, “I feel every single day that I'm living in a country which is at war”. According to the Ambassador, although armed conflict is taking place only on one part of Ukrainian territory, it is impossible to forget about multifaceted hybrid war and Russian-backed armed formations that destabilize the situation in Donbas. The Ambassador mentioned his visit to Avdiivka alongside the Ukrainian president and his concerns about Ukrainian soldiers' death.

On Sweden's presidency in the OSCE

“Sweden will do its utmost to contribute to the full implementation of the Minsk agreements”, - said the Ambassador.

During Sweden's presidency in the OSCE, the organization will focus on the Donbas region's peacemaking process. Ambassador Thyberg notes that Sweden's approach to progress is «healthy realism» and names two crucial areas of the OSCE work for Sweden in Ukraine: the situation of the civilians and human rights violations.

On the Nord Stream-2

“It was not in our power legally to prevent the building of this pipeline [Nord Stream-2] through the Swedish economic zone”, - stated Ambassador Thyberg.

The Ambassador explained that Sweden could not prevent the construction of Nord Stream-2 through its economic zone but could make its demands, for example, «on the way in which this pipeline construction respected environmental safety».

On the occupation of Crimea

“The Russian occupation of Crimea is a gross unacceptable violation of Ukraine's territorial integrity”.

The Ambassador mentioned that Sweden strongly supports the Ukrainian initiative to create a Crimea platform, efforts to use diplomacy tools to keep Crimea high on the international agenda. According to the Ambassador, the occupation of Crimea affects the security of Europe. It is an international law issue, human rights and security issue.

On critical reforms in Ukraine

According to the Ambassador, “It [decentralization] is one of the most important and successful reforms”.

Ambassador Thyberg explained the meaning of self-government for citizens: they can affect the decisions, directly impacting them on a local level. Also, the Ambassador emphasized media reform importance. Ambassador Tobias Thyberd noticed that Ukraine has a media landscape dominated by commercial players. Thus, it is necessary to establish impartial public broadcasting. His Excellency also mentioned financial sector reform in Ukraine and praised those dedicated public officers whose work contributed to the financial stability of Ukraine.

At the same time, the Ambassador noticed: “I would not be surprised if Russia had limited interest in the success of Ukrainian reforms”.

On the investment climate in Ukraine

“The investment climate in Ukraine still has serious problems”, - said the Ambassador.

Ambassador Thyberg expressed his admiration for Ukraine's economic potential, geographical position in the middle of Europe, human capital that cannot be found in Sweden, level of education, entrepreneurship, creativity. The Ambassador said that there are many successful Swedish start-ups developing in Ukraine. However, speaking about IKEA's entry into the Ukrainian market, he mentioned that Ukraine's investment climate problems remain.

On DIIA City and digitalization

Ambassador Thyberg is aware of creating the project DIIA CITY to develop a particular legal framework for the IT industry. He congratulated the success of Minister of Digital Transformation Mykhailo Fedorov: "Deputy Prime Minister Mykhailo Fedorov is doing a phenomenal job". However, the Ambassador mentioned that establishing a legal system is also necessary for investors not to worry about efficiency and fairness of solving their legal problems.